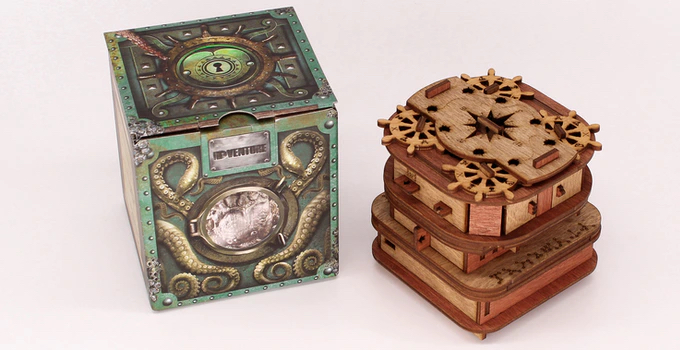 “London, 1720. Ian Kensington, captain of the British Engineering Forces, is responsible for the first successful recovery of a sunken ship. In the report to His Majesty King George I of England, Kensington mentions Davy Jones’ locker for the first time. Despite it being a real artifact, he describes the locker in the context of a legend about the sea devil Davy Jones, who supposedly locks away the wandering souls of all sailors who lose their lives at the sea. It is told that on each sunken ship, he hides a replicate of the locker, promising to release all souls if someone manages to open the box.

Since the first find, similar lockers were found in shipwrecks scattered around the world. Some of them are still kept in private collections, others in museums. However, nobody has been able to reveal their secret so far.

We are sure that you are the one, who will finally be able to open the locker and force Davy Jones to admit his defeat.”

This is one of the more unique games I’ve played, Cluebox is an intricate puzzle box that has been (hand?) assembled from laser-cut birch wood. There’s nothing else out there like it for the price—only €35—so I couldn’t help but pick it up, if for no other reason than the novelty of the experience. Fortunately, it ended up being a solidly assembled puzzle experience.

While playing the game, I felt a pervasive sense of delight as I methodically peeled away the puzzle box’s layers and marveled at the game’s construction. Incredibly, the game doesn’t use any glue or metallic fasteners to hold the game box together, it’s all held together by cleverly-designed woodworking joints. It works surprisingly well, though there is occasionally a wood-on-wood friction that prevents the moving pieces from moving smoothly. It’s a minor quibble at best and doesn’t diminish the impressive engineering on display.

The only real ding against the game is that the entire experience was on the shorter side, I was able to solve the entire puzzle in 50 minutes. I felt that—for me—the novelty of the experience made up for the short runtime, and the game is attractive and small enough that I’m looking forward to placing it on my memento shelf. After finishing, I found myself excited to try some other physical puzzle experiences, like iDventure’s first Cluebox experience Schrödinger’s Cat, or the Seattle-exclusive experience The Void. So, hopefully you’ll see more from me on those experiences soon.

The game comes with a card that includes a couple of paragraphs of story and there’s a few sentences of wrap-up available at the end of the game. But aside from that, which seems to be there to accentuate the game’s nautical theming, there really isn’t much narrative to be had in this game. Mildly disappointing, but not a deal-break considering the nature of the experience.

The puzzles are all built-into and are solved exclusively on the cube itself. You won’t need any additional materials or websites to solve the puzzles, which is impressive given the cube’s small size. That said, that same small size limits the game to effectively only two primary puzzles in the cube experience and perhaps four-five miniature puzzles that supplement them. There was literally no space left for additional puzzles to be incorporated, so I did appreciate that they did the most that they were able to do with the space they had.

The puzzles themselves are well designed and thematically themed, though they were a little on the easier side of things. Without spoiling too much, they even managed to include a really smart red herring. I typically am not a big fan of them in games, but this was one was mild and clever enough that I didn’t mind it.

There is no hint system available, so if you do get stuck you’ll need to search the web or wrangle in a friend.

Whether or not you should pick up this game really comes down to one question: How exciting is being able to hold and solve a tangible puzzle box going to be for you?

If the answer to that question is “pretty exciting” then this will be a great game for you to pickup. It’s a seriously impressive construction, with some truly fantastic design and engineering behind, at a great price point.

Otherwise, if the tangible elements of the game leave you feeling cold, tjhen the amount of puzzle you get for the cost of this game is pretty thin and you might be better off with another, more puzzle-dense game.