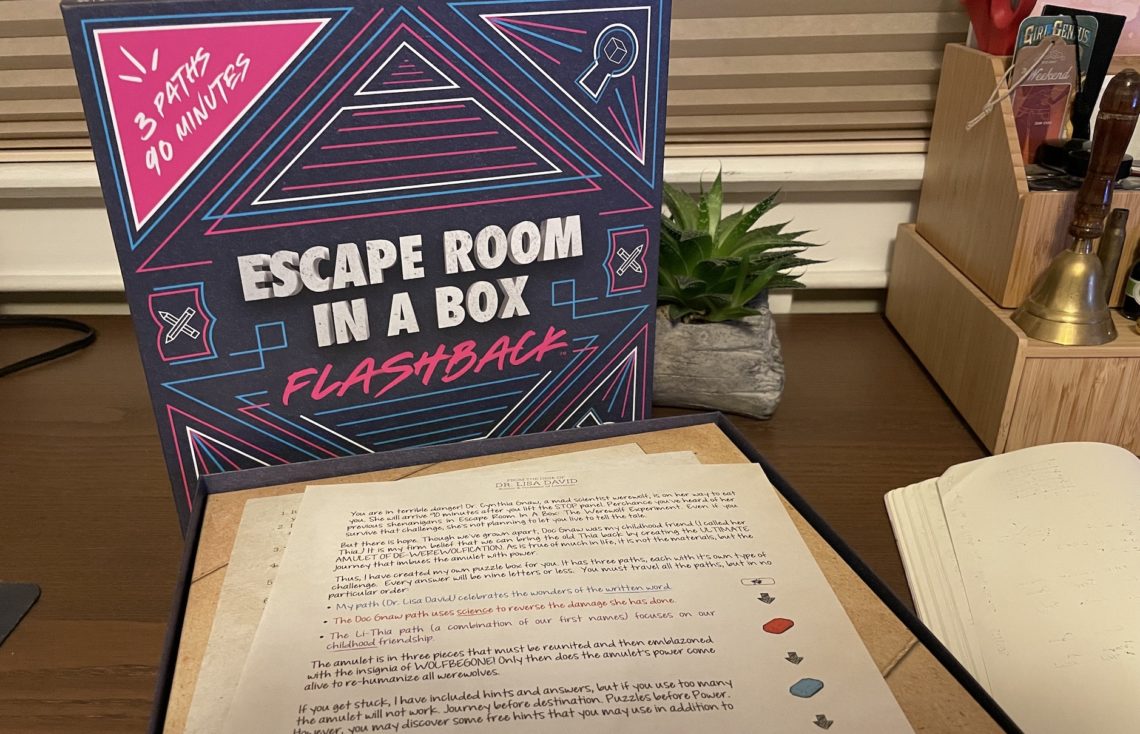 “To beat this exciting escape room game, you and your friends have 90 minutes to decipher clues, solve puzzles, crack codes and flee the mad scientist werewolf, Doc Gnaw!”

It was about this time last year that I played Escape Room in a Box: The Werewolf Experiment, which I enjoyed enough to order this sequel immediately after. After it arrived though, it set on my shelf—collecting dust—as I played and explored through games from smaller creators. That is, until I found myself with an atypically free Sunday evening and wanting to play something quick and straightforward. Escape Room in a Box: Flashback proved to be exactly what I was looking for.

Much like The Werewolf Experiment, Flashback is modeled after an early generation Escape Room: if you fail to solve the room in 90 minutes or use too many hints you lose. Of course, this is all completely on the honor system, so play in whatever way is most fun for you.

I decided to go ahead and challenge myself to play by the rules—putting myself at a slight disadvantage as the game was designed to be played by multiple people simultaneously. Fortunately, even playing at a fairly languid pace, I was able to solve the puzzles and save the day with plenty of time left on the clock!

The game functions as a sequel to the story of the first game, bringing back the mad, lycanthropic, mad scientist Dr Cynthia Gnaw. In a pleasing twist,, however, she functions not as the antagonist, but as the person you are charged with saving. The game is presented as a quest given to you by Dr Lisa David1A cute shout-out to Room Escape Artist founders Lisa and David Spira to save Dr Gnaw, her childhood friend. Oh, and to do so, you have to solve these puzzles in 90 minutes or less and not use too many hints. For reasons. (I think the game would have been better served dropping the “timed escape” conceit entirely.)

While there isn’t much to the story beyond that, Dr David has personality to spare which shines through both in her writing and her fondness for Dr Gnaw. The game gives you just enough to let you fill in the blanks a bit, coming together to tell a wholesome story about childhood friendship and fighting to save it. Not bad for a mass market game!

The game is comprised of three different quest-lines—each of which can be played independently of each other—which then tie into a final meta puzzle. For an experienced puzzler, the puzzles definitely fall on the easier side of things. The hint book remained resolutely closed for the entire game. For a game designed for the mass market, erring on the easier side makes a lot of sense. I had fun solving the puzzles, but I was never challenged too much by them.

The puzzles themselves are well-written and have a smooth flow to them. They feel like they’ve been a little more tested and have had the rough edges sanded down compared to those in The Werewolf Experiment, which had some issues with the puzzles with physical components.

Much like Box One, it can be easy to jump the guardrails on some of the puzzles. I would recommend that you try not to get ahead of the game, let the puzzles lead the way and it’ll make for a much more fun solve experience.

This would be a perfect game for an older child or teenager or for someone new to the hobby who is looking to find a good entry point.

For the experienced puzzler, I wouldn’t call this game a must buy. However, with it’s low price and surprisingly good production quality considering, you could find many worse ways to spend a lazy Sunday evening.