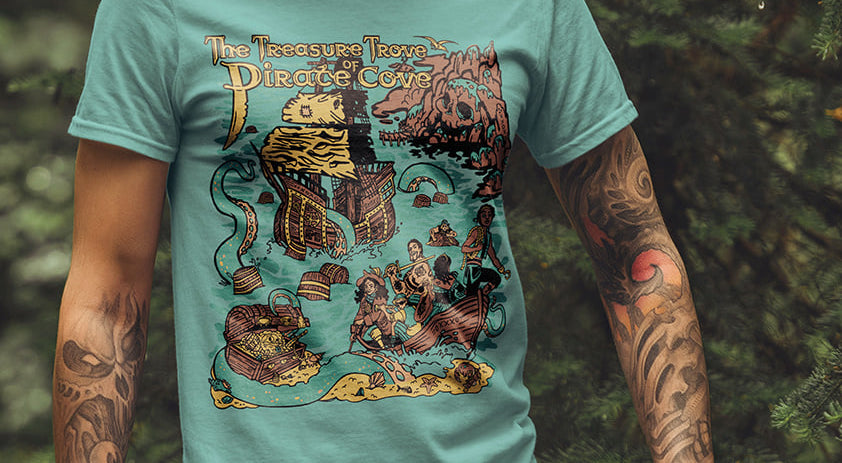 This double-sided shirt is filled with hidden details, secret information, and other surprises. These clues help you solve a series of puzzles and challenges as you search for lost pirate treasure.”

Solve our Shirts: Escape from the Maze of the Minotaur was one of my favorite at-home games I played last year, so my excitement level and expectations were set pretty high when CU Adventures announced a sequel shirt—”The Treasure Trove of Pirate Cove”!

Those expectations were exceeded, as CU Adventures’ sophomore effort is a step up in nearly every way. The bright and colorful design on the shirt is a home run, featuring far more detail and action than their previous design with Minotaur. That design—quite thematically, mind you—emulated Greek black-figure pottery, whereas Pirate Cove has a style that evokes a pulp adventure comic book—the action practically leaps off the shirt. The shirt itself is soft and well-made and the fact that it comes in extended sizes is a very welcome positive!

After receiving the shirt, I saved it for one of those rainy, gloomy Saturday afternoons that gives Seattle its dour reputation, which proved to be a great time to imagine myself far away on a sunny, tropical island. My crew and I had a delightful time proving ourselves as pirates and finding the treasure, with the entire adventure clocking in around 90 minutes.

I appreciate that the theming here acts more as a framing device, flavoring the puzzles and the solve experience, but never keeping you far away from the shirt. The shirt—and its novelty as a medium for puzzles—is the star of the show here, and the game doesn’t let you forget that.

The excellent online game interface—the same acclaimed system that powers Lost Temple and Floor 13—keeps the game flowing smoothly and provides some thematic background music as you play. The game comes with a few, well-made props that are used to great effect to bolster the theming of the game.

One of the clear standouts this time around were a few pirate-themed songs that were written for the adventure by Arne Parrott. The moment I heard the first song, I shouted “And Arne Parrott did the music!” as will likely anyone else that also listens to the excellent Hey Riddle Riddle podcast. The songs are great and I appreciate that the game offers to let you listen to them again at the end of the adventure.

The puzzle play in this game is buttery smooth—we always had an idea of what we should be doing and how we should go about doing it. We found the puzzle to be a pleasing difficulty and well-written, requiring a minimal amount of hints but still making us feel accomplished and smart for solving them.

The responsibility for setting up and defining the puzzles falls squarely on the props and web interface but, crucially, the solutions to all of the puzzles are on the shirt itself. Once again I found myself in awe at all of the ways they are able to hide and craft puzzles on a T-Shirt, especially as all of the puzzles here are completely distinct from the puzzles in the Maze of the Minotaur.

As colorful as the game design is, I appreciated that all of the puzzles were colorblind friendly. There was one puzzle in particular that used color as a component but augmented it with textures and patterns in a perfectly seamless manner. If I ever update my colorblind game design article I would love to use this puzzle as a sterling example of color-based game play done right.

CU Adventures has another hit on their hands here. The Treasure Trove of Pirate Cove takes everything that was great about Maze of the Minotaur and iterates and improves on it to wonderful effect.

This would be an excellent experience for the new puzzler and seasoned expert alike. And, hey, once you’re finished, you’ll have a comfy and colorful conversation-starter of a shirt as a pretty awesome memento of the experience. It comes with my highest recommendation.