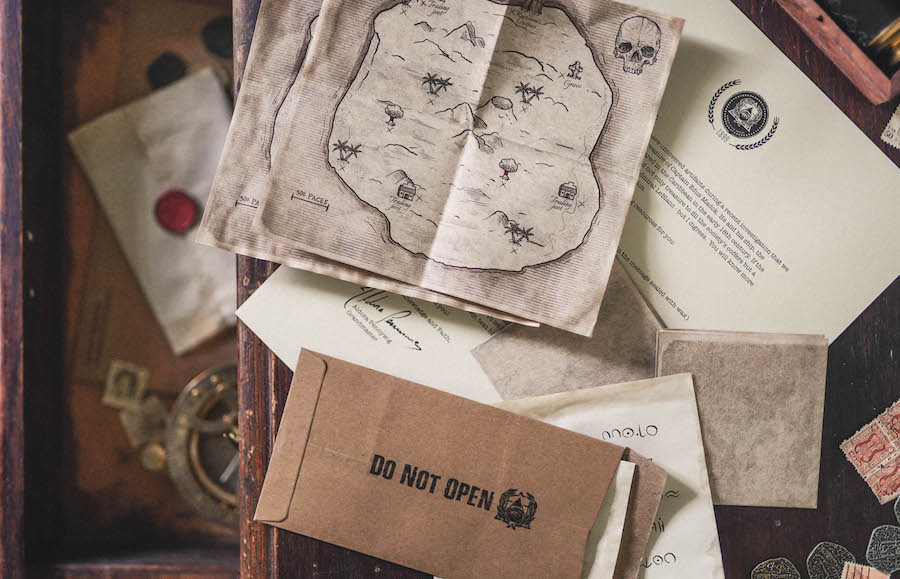 “Ready for adventure? Explore the Caribbean Sea and track a treasure lost since the Golden Age of Piracy!

What’s in the game? You receive a mysterious envelope filled with clues and artifacts: ancient maps, wax-sealed cryptic notes, a golden coin, and more. Deep-dive into the ancient objects, articles, and expert resources to track down the location of the treasure!”

Much like Box One, Society of Curiosities was recommended to me by the same friend who posted the link to the massive Play at Home Escape Game Flowchart. It looked really neat and intriguing, so I went ahead and signed up for a subscription and then waited patiently by the mailbox for my package to arrive from Hawaii. When I received it, I was a little surprised by how small the envelope was; it didn’t seem like much of a game could fit in there. Boy, was I wrong! Inside the envelope was a metal coin, a wax-sealed letter, some maps, another sealed envelope (for later), and a couple of pages that appeared to have been torn from a magazine. As you start playing, the game quickly expands from the materials given to you in the envelope, to the real world beyond. It’s a really neat and magical trick and the game designers have obviously put a lot of thought and work into making it all work as seamless as it does.

I played through on my own and it took me approximately two hours to complete the game and solve the mystery of Madok’s treasure. The game thoughtfully offers you a good breaking point in the middle. I took advantage of it, pausing for the evening and restarting the next day, and was able to pick back up from where I was pretty seamlessly.

The game seems to have been built top-down from the story idea and the narrative shines as a result. The game is chock full of colorful characters, whom you actually get to interact with via text message (they’re in my phone’s address book now!), that guide you through the mystery and make you feel like a vital part of the team. While the story idea of searching for a pirate’s treasure sounds pretty rote on paper, they wisely focus on characterizing the titular pirate, with the majority of the artifacts you interact with in the game written from his perspective. It made for a really unique and fun story experience.

The game ends with a tease of the story to come, which left me very excited for the next chapter to be mailed to my house! (And impatient, as there’s a three month wait between chapters!)

I should say up front that I’ve never played an ARG before, so if you have, this may not be as novel to you. However, this game blew my mind! The creators of the game have blurred the line between puzzle and reality in a really novel way. I’m going to try to steer around spoilers here, so this will be a little vague, but not only have they created a game world and integrated it into the real world, but they have also taken the real world and integrated it into their game world. There was one moment in particular when I was sure they had created something specifically for the game only to find that that would have been impossible for them to do.

The puzzles are very well designed and integrate both the ARG elements and the physical components seamlessly. Nearly every part of the game you receive is important, and will likely be used for one or more puzzles in the game. (So don’t throw anything away!) Some of them were pretty challenging, but there is a very well-designed hint system in place if you do get stuck.

This game was something new and exciting and is on my shortlist of favorites for the year; I can’t recommend it enough. If you do order the game—or if you’re on the fence about whether or not you want to give it a try—I recommend going through the Mysterious Map Heist first. It’s free if you subscribe to this game and, if you buy it before subscribing, they’ll give you a discount on the subscription equal to the purchase price. It functions both as a prequel to this game—setting the this story in motion—and as an on-ramp to Society of Curiosities unique style of traditional and ARG puzzle play.

The game is good for solo play, but would also be fun with another person or two by your side. You’re in for a great time either way!