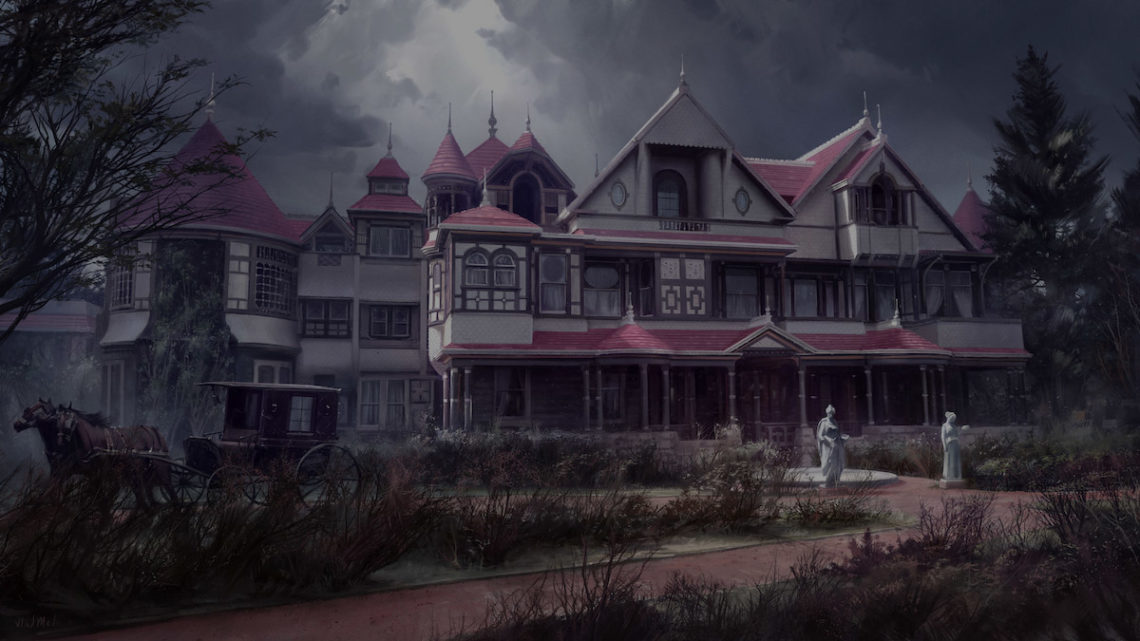 “The Winchester Mystery House has recruited you to look into strange, possibly paranormal events.

You will communicate with your team on the ground to guide them and immerse yourself in a world of mystery that will have you wonder if ghosts are real!

Unlock the secrets of the Winchester Mystery House archives and Sarah Winchester’s grimoire and solve the case of The Glasshouse Ghost!”

The Glasshouse Ghost is the first in an inspired partnership with The Winchester Mystery House, a real-life, spooky mansion in Northern California, that should hopefully lead to many more thematic games.

When I played this game in April, I didn’t know much about the Winchester mansion, aside from vague recollections from some late-oughts Cracked listicle. However, I found that the touching story (imagined for the game) and the spooky environment (quite real) to be the perfect pairing for a fun, relatively brief game experience, that I was able to play through in about 40 minutes.

Coincidentally, a few weeks after I played the game, I took a road trip to the Bay Area and got to visit the house! I couldn’t resist taking a selfie in the conservatory, where the game is set:

The Glasshouse Ghost, unsurprisingly, is the story of a ghost trapped in the Winchester Manor. While the story is completely fictional, it’s inspired by the folklore and legend surrounding the Winchester Mansion. It’s a sad tale, but despite involving ghosts and a haunted house, is not a scary game.

The game manages to pack a well-told and touching story into a relatively small amount of content. This sort of narrative economy is difficult to achieve and takes a deft writer, I was very impressed with the writing.

The game plays much like their other digital-only games The Bewitched Circus and Mysterious Map Heist, through a chatbox system with well-programmed AI bots. The chatbox felt a little more rigid than it usually does for a flagship Society of Curiosity game, but I didn’t have too many problems with it. Aside from the chatbox, the game interface is more sophisticated than those earlier games, picking up some new tricks from their FairyTale Files series of games: all of the game components are laid out on one screen, the game interface features elements that change based on your actions, and many of the responses from the in-game agent were narrated. Best of all, the hint system is fantastic, offering you contextual hints based on where you are in the story with just the click of a button.

Most of the puzzles are based around a radio that you can tune to different frequencies. Communicating with ghosts through radios (or Ghostboxes as ghost hunters call them) is a smart, thematic choice for a puzzle game and it works well here. It does present an accessibility issue for players with hearing impairments though, as the ghostly music and sounds that come through the radio are not transcripted, unlike the rest of the content. (An odd oversight, as SoC is typically very good about such things.)

Overall, the puzzles were one the easier side of the spectrum, though still fun to solve. They should provide a good challenge for newer players, but experiences players should breeze through pretty quickly

The Glasshouse Ghost feels like a game that is designed for players that are new/unfamiliar to the puzzle game hobby, who might be finding their way into it from their experiences with the Winchester Manor. In that respect, it’s an excellent game for new players, who may be intimidated by the difficulty levels and lengths of other games in the hobby.

For experienced puzzle gamers, this game is best played alone, perhaps as a quick and fun way to spend a lunch break at your favorite haunt.