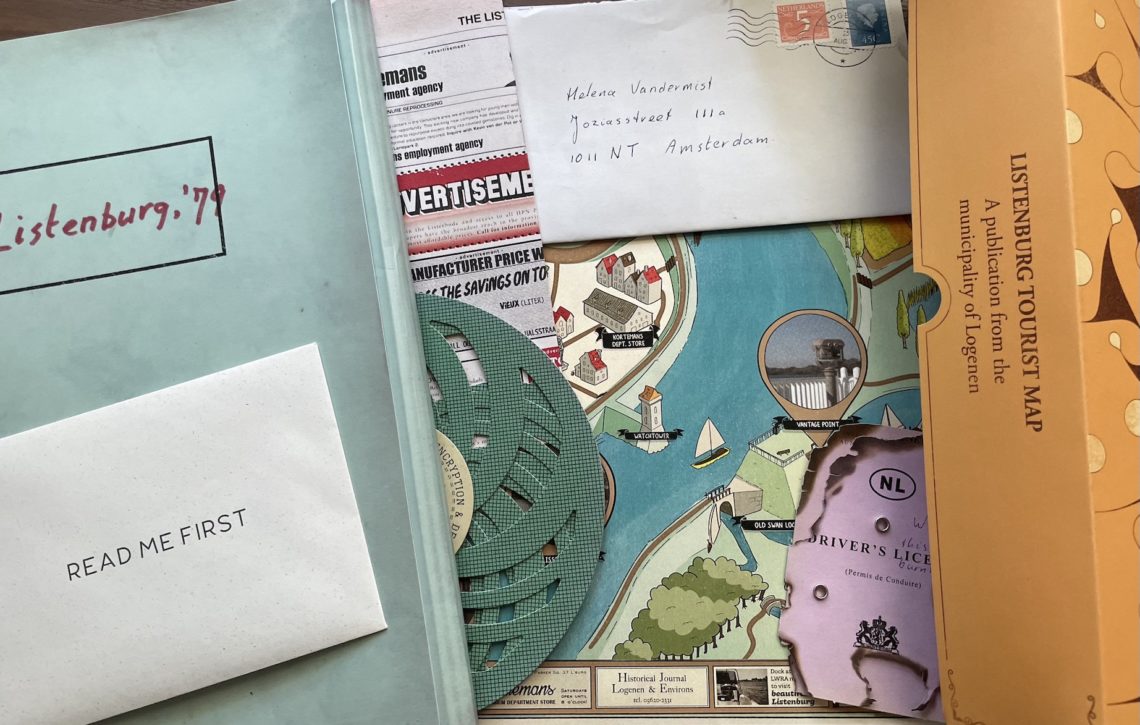 Note: Diorama Games provided a complimentary copy of this game for review, but that has in no way affected the content of this review.

“My name is Helena Vandermist. My sister Abigail went missing in August of 1979. Everyone around me drew the obvious conclusion years ago, but I was never able to.

With this letter you will have received a dossier. Shortly before her disappearance, Abigail made certain it would come into my possession. In it, she speaks in cryptic terms, but I get the impression she left willingly, and I believe it was related to another missing persons case she was investigating.”

When I dived into the deep-end of the puzzle game hobby earlier this year, PuzzelPost was one of those companies that popped up on my radar as doing some really cool things in the industry. Unfortunately, those really cool things were only in Dutch, a language that I am far from fluent in. So, I was delighted when they reached out to me last month to see if I would be interested in playing and reviewing their first-ever english title ahead of its Kickstarter launch in late September.

The Vandermist Dossier is based on Het Boekanier Dossier, the first in a trilogy of Dutch mystery puzzle experiences released by PuzzelPost. (It’s worth nothing that, with the release of Vandermist, PuzzelPost is changing their name to Diorama Games.) The game’s narrative and puzzles have been expanded and polished for its English release.

The first thing I noticed when diving into this experience, was just how authentically 1970s the box—and everything in it—felt. The artifacts inside the box are convincingly aged to feel over 40 years old; the color palette, the art design, and materials used all screaming late 1970s.1Or at least my idea of the late 1970’s, as I was born in the early 1980s. You can see this with the items in the featured photo above, though take a closer look at this map case:

Those are colors and patterns that could only come out of a decade that was obsessed with earth tones, waterbeds, and shag carpets.

The experience starts with an introductory letter from Abigail’s sister setting up the mystery and stakes of the game and pointing me towards a good starting point. Once on my journey, it took me a little over two hours to solve the two questions that the game asked me to solve, namely: Where did Abigail go in 1979 and who took her there? Tantalizingly, even after the experience had finished, there were still many questions remaining about the present fate of the still-missing Abigail. Questions, I’m excited to find the answers for in the two upcoming chapters of the trilogy.

Overall, I ended up having a wonderful time with this experience. The marriage of narrative writing and puzzle design here are exceptional, leading to a fantastic, holistically-realized at-home experience. I’m very excited to see what the next two chapters have to offer, both story-wise and puzzle-wise.

One more thing worth mentioning, my review reflects the game as I played it. The physical review copy I had was complete, though the website that accompanies the game was not yet completed. The site will be used to let you send your solution to Helena Vandermist (I sent my solution in over email), for the hint page (which was live for my playthrough), and a few other really neat things Diorama games is hoping to add. Diorama also let me know that some of the props might also change slightly between this version and the final version—they said they were looking for materials and mediums they could use to make the props feel even more authentic, which given the quality on display here, would be quite impressive.

As mentioned, the game opens up with a letter from Helena Vandermist, who has spent the last 40+ years trying to solve the cold-case of her sister Abigail’s disappearance. Before Abigail went missing, she sent Helena a box of puzzling items, presumably related to another missing person case she was working on. Helena missed the importance of the box at the time, but now realizes that it (and you) could be the key to solving the mystery.

This is a pretty standard setup for a mystery puzzle experience, but then the game does something that I feel is really special with the narrative. As you progress through the experience, you experience the story from the perspective of Abigail, learning more about her—often strained—relationship with her sister, her passion for journalism, and the difficulties of being a career woman in the 70s. By the end of the game, Abigail is more than just a face in a black and white photo, she’s a three-dimensional character, one whose fate you’re invested in.

When I was first told about the game, I assumed it would be another “solve the murder” type of game. However, the game makes it clear from the very beginning that this would be a different experience; one that involved a woman choosing to disappear and to give up everything dear to her—Abigail’s agency in her own mystery is a breath of fresh air in this genre, which is so often dominated by the murders of women.

Along the way, the narrative takes some very interesting twists and turns throughout the experience, going places I didn’t expect and leading to a conclusion that is both satisfying and a perfect setup for the next chapter in the series.

While talking about narrative, I also need to give another shout-out to the quality of the items in the box. The attention to detail is on full display, creating a sense of narrative immersion that makes it super easy to maintain your suspension of disbelief. From the period accurate “Kodak/Velox/Paper” logo printed in fading ink on the back of the picture, to the zig-zag cut of the newspaper edge, and the color palette and drawing style of the town map; it’s obvious that a lot of care and thought was taken when creating the items in this game.

I’ve talked before about mimetic puzzle design2I’ve probably talked too much about it, but that article by Errol Elumir is really good and made an impression on me for games like Root of All Evil and The Memory Stone, and the Vandermist Dossier joins their ranks as a game that truly excels at it. The setup is pretty similar to The Memory Stone—the puzzles were created in-universe by a person who felt the need to use ciphers and codes to protect the information they are sending you. It’s a simple idea, but one that can be hard to execute. Keeping the design mimetic means that the game has to flow completely within itself, the answer to each puzzle needs to lead to the next puzzle, until you arrive at the solution. The solution then needs to make sense narratively, while not being so long that deciphering it becomes a laborious chore. The experience manages to balance all of these requirements and still create a really memorable set of puzzles.

The difficulty of the puzzles ramp up nicely throughout the experience, starting on the easier side (hmm, I wonder what I should do with this shredded paper?) to some that were fiendishly clever and novel. All of the puzzles were fairly written and I’d put the overall difficulty somewhere around medium-hard. There were a couple of puzzles that sent me to the hint site—which was nicely designed and offered progressive hints—but I likely wouldn’t have needed it that much if I had another team member or two solving with me.

As a bonus, none of the puzzles required distinguishing between colors, which I really appreciated.

Diorama has made something truly special with this game, and I’m really excited to see both how this story continues and how they’re gonna top the puzzles in this game.

At the time of this publishing, the game isn’t available for immediate purchase, but will be going up on Kickstarter at the end of September. According to Diorama, the game starts at $49 and is expected to also have a deluxe tier for collectors. Once it launches you’ll be able to find it here: https://www.kickstarter.com/projects/diorama/the-vandermist-dossier

I highly recommend this experience, especially to anyone who’s a fan of mystery games and is looking for something memorable and unique.