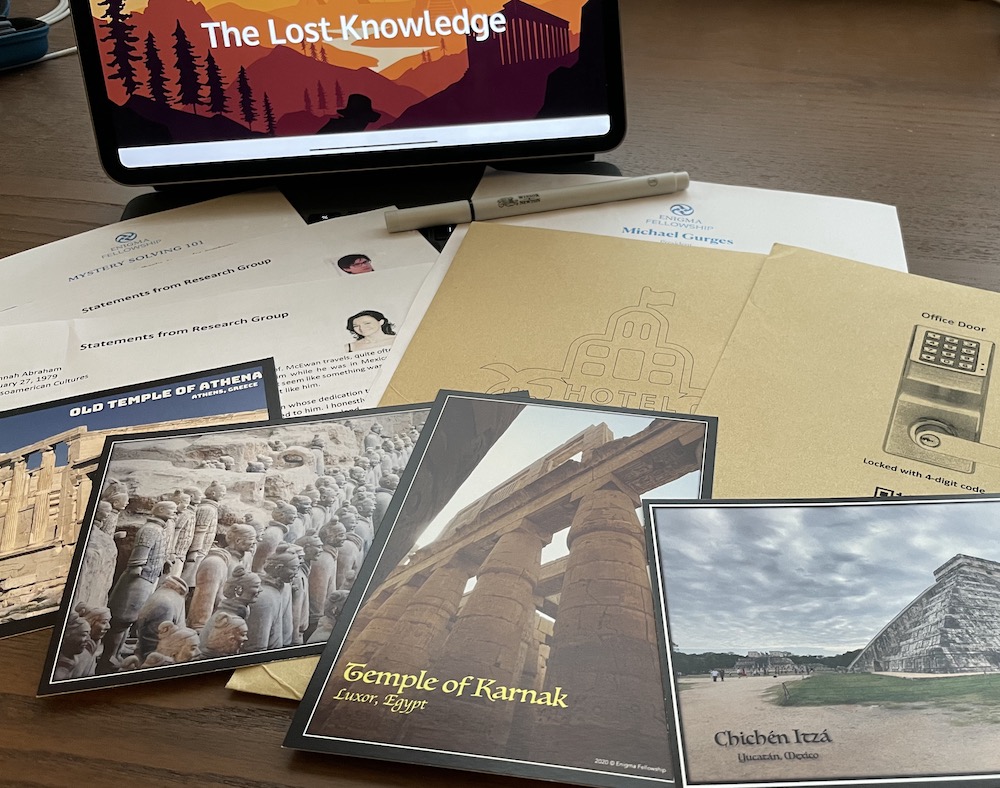 “Prof. McEwan, a renowned archaeologist, is missing. His research group thinks he may be in danger. He was searching for a lost artifact of great significance. The Enigma Fellowship has been engaged to locate him and help solve his quest.

Solve brain twisting puzzles to find the professor and then solve challenges to gain trust of an ancient culture. Are you up to the task of finding the lost knowledge and solving this enigma?”

I’ve been solving enigmatic mysteries and saving the world for a little while now. As such, I am a member of several organizations of a most peculiar nature, with names like the Society of Curiosities, the Society for the Observation of Unknown Phenomena, the Curious Correspondence Club, and the Scarlet Envelope. So, I suppose it’s only natural that an organization with a name like Enigma Fellowship would be keen on recruiting me into their ranks, as I’m clearly a fellow of enigmatic renown.

I imagine there will come a point when I get secret society’ed out, but as long as they continue doing things as well as Engima Fellowship (and the others listed above) that day will hopefully be a long ways off. But, I’m getting ahead of myself here a little bit.

I’d heard that Enigma Fellowship, despite the now-familiar conceit, has done some unique and interesting work with their subscription game series, so I joined up to try it out for myself. When the envelope arrived (fresh from Germany!) I was pleased to see not only the first installment of the game, but also a small pouch of Haribo Gummy Bears waiting for me in the bag. Between this and Welcome Home‘s brownies, I’m very much here for puzzle games including desserts with their experiences.

The game came in a clear plastic envelope and, honestly, didn’t look like it included all the much. There were a few postcards, a couple of pieces of paper, and two sealed envelopes. Like many games these days, there’s a website in place that checks your answers, provides story, and tells you when to crack the seals on those envelopes. Despite the slim appearance, the envelopes contain a series of nested envelopes to puzzle your way into, and has much more in them than you would expect at first glance.

Aside from a hiccup early on (my fault for not reading the instructions more clearly), the experience was a smooth and entertaining puzzling adventure, taking me about 90 minutes to play through. I did have a few minor quibbles about representation that I’ll unpack in the narrative section, but overall this was a solid first outing from Enigma Fellowship. Which is extra-promising because the creators candidly talk about how they feel their later games are better than this first game. I’m excited to try out those later games.

One more thing that I really like about the Enigma Fellowship is their commitment to mitigating the environmental impact of their games. Typically when ordering an at-home puzzle game, I have them shipped to me, play through them once, and then get rid of them. (Whether that’s passing them along to other friends, recycling them, or—worst case—chucking them in the bin.) I’ve rarely stopped to consider the environmental impacts of my participation in the hobby, but they definitely do exist. So, it’s heartening to see the approach that Enigma Fellowship has taken with the production and shipping of their game. They detail it all on the Environmental Impact page of their site, but the short version is that they plant a tree for each copy of the game sold, and every other part of their process is carbon neutral. It’s a really thoughtful idea and one that I hope sparks other companies (and consumers!) to consider their environmental impacts.

The story for Enigma Fellowship is pretty typical puzzle game fare. You start the game by trying to track down a missing professor and need to search his office and some mysterious communications he’s left behind to track him down. From there the game takes off, as you leave his office and make your way around the world.

The game includes some clever props, including excerpts from real-world academic papers, to help increase a sense of immersion. The postcards included were a real standout, all the more impressive considering they were created for the game by the creators, with the photos on the front of them were snapped by them when they visited those real world locations.

As mentioned, I did have some minor representation concerns about this game, specifically in the portions at the end of the game. There’s no real good way to talk about it without spoilers; so I’ve hidden the spoiler-y parts. Feel free to skip this if you want to go into the game completely fresh. Near the end of the game, you go to the Chiapas region of Mexico and find “the last tribe of the Aztecs”, who have a piece of priceless, ancient knowledge that they will give to you if you prove your knowledge of the Aztecs and get inducted into the tribe. These elements graze up against some really entrenched and problematic tropes regarding indigenous peoples in the Americas. (e.g. Lost Tribe, Noble Savage) There’s a behind-the-scenes write-up at the end of the game that explains why they chose this particular story and these elements, so I think it’s safe to say that they were well-meaning and that this wasn’t intentional. However, it’s definitely something that could be improved in future games (or later printings of this one).

The puzzles were solidly constructed and made good use of the material components included. I really enjoyed the game’s use of QR codes. I was playing the game on my iPad, so it was fun to find a new code and quickly scan it to see where it lead me. The difficulty fluctuated a little throughout the game—in my experience the earlier puzzles were more difficult than the later puzzles, ramping down, instead of up.

Most of the puzzles were text-based, requiring you to read text and solve clues. However, there was one puzzle in particular, near the end of the game, that delighted with it’s simple, yet effective construction. Proving that you can still do clever design on materials that were printed on (what appears to be) a consumer-level printer.

Like many online games, the code entry system is case-senstive and solutions need to be entered in a very specific format to be counted. This is mentioned on an instruction sheet at the beginning of the game, though not very prominently. It tripped me up at one point during the game, sending me down a rabbit hole I didn’t need to go down, but, after that, I understood the rule and it wasn’t much of an issue.

One unique feature that I loved was a particular puzzle that required some math to solve. I love math and didn’t mind running through it, but there was a prominently labeled dropdown titled “Don’t feel like doing math (but also don’t want to look at the solution)?” that did exactly what it said it would. It solved the math portions of the puzzle, but left the rest of it for you to puzzle out. It’s a very nice, user-friendly little touch.

The hints and solution system worked well, providing progressive hints ending in full solutions. It is always great to see these sort of systems in place.

This was a pretty solid puzzling experience and a great debut outing from Enigma Fellowship; leaving me ready for their next installment.

While I feel that there are better games for beginners (The FairyTale Files leaps into mind), I would recommend this for enthusiasts and players with a few games under their belts who are looking for a solid 90 minutes of enigmatic fun.