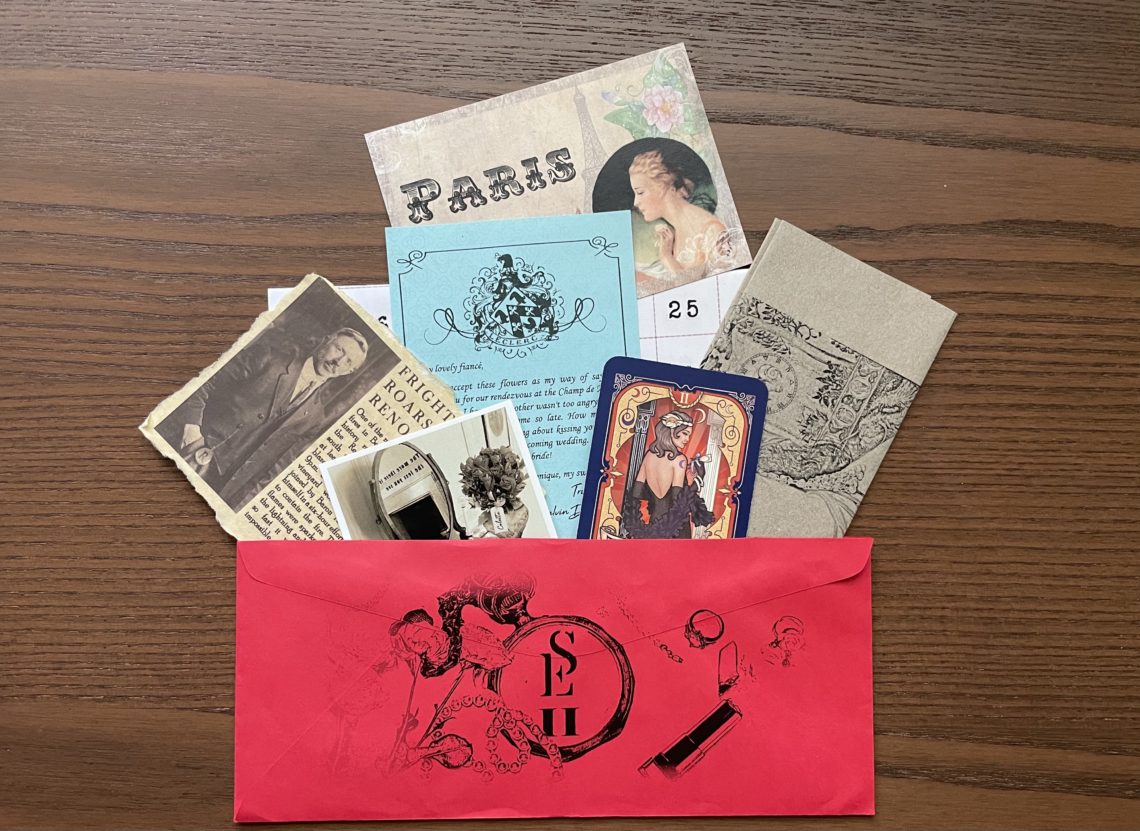 “Paris, 1899. Colette, a gorgeous cabaret dancer, disappears. Her dressing room is full of confusing leads: among the jewelry and love notes, you find a threatening letter and some truly unexpected things from the past. Who is she..? And what happened to her? Find Colette and reveal her dark secret!”

The contents of the eponymous envelope were similar in quantity and quality to Chapter I, featuring several very well-made paper props; the jewel of which was a beautifully designed tarot card created specifically for the game:

The game was played using the physical props in concert with the Scarlet Envelope website and the experience is bookended with some really well produced videos, that setup the story and then recap your actions in it. Overall, the production quality of the props and the videos were very impressive.

The difficulty of this game was definitely a large step up from Chapter I and it took me just over 90 minutes (about twice as long as Chapter 1) to solve the puzzles and figure out the story and fate of Colette, the Lapin Blanc cabaret dancer. The difficulty was a welcome challenge and I ended up needing to use a couple of hints near the end of the game, which were able to gently nudge me in the right direction. (It’s worth noting that I opted for the “harder” version of Scarlet Envelope, so I’m not sure how much easier the beginner version of the game is.)

That initial chapter of Scarlet Envelope revealed a very ambitious roadmap for the series, filled with intrigue, mystery, and—novelly—a very wide variety of settings that the creators were looking to explore. This time around, the setting is a turn-of-the-20th-century Paris cabaret, immediately evoking one of my favorite movies: Moulin Rouge. While there may have been a lack of singing and dancing in this particular mystery, the story (intentionally or not) does share several elements in common with that story; I won’t spoil them here, but I do think I could make a pretty compelling Cabaret in Lapin Blanc recap using just Moulin Rouge gifs!

In thinking about the game narratively, I was really pleased by how central to the game the story was; figuring out just exactly who the central character is and what her motivations and background are is a key part of the mystery. At the end of the game, there is even a quick, fun quiz on the story to see how much of it you were able to figure out during the game. I felt pretty proud that I was able to get 100% on the quiz, as the questions required some serious sleuthing.

The story itself was compelling, and the time travel elements leave me intrigued about my future role at the Scarlet Envelope. In some ways, it almost felt like another favorite of mine, Quantum Leap; I was sent back int time to solve a mystery and potentially right some wrongs. I’ve always wanted to be Sam Beckett, so this game is right up my alley.

As I talked about above, the puzzles were a serious step up in difficulty from Chapter I. The game ramps up very well, with the first few puzzles taking a little bit of effort to suss out, and the final puzzle being one of the most difficult puzzles I’ve encountered in an at-home game. While it was fairly difficult, the solution made sense, and overall I felt it was fair. It was definitely one where I wished I had a teammate or two to help me get out of my own way, which I’m prone to do when gaming on my own.

The puzzles themselves were pretty diverse in form, no two feeling quite alike, and one or two employing some unique spins on some classic puzzle types. Speaking of, several of the puzzles required being able to distinguish between a rainbow’s worth of colors to get past, without any secondary characteristics to aid in the distinction. So, unfortunately this Chapter was not terribly colorblind friendly. It did inspire me to create a video about how I solve these sort of puzzles when I’m gaming on my own, using some built-in tools on my Mac. You can see that here: Computer Tools for Solving Color Puzzles While Colorblind. (Of course, going through all of that extra work to identify the colors does take me out of the game and throws me well outside of my internal suspension of disbelief, so not optimal.)

The hint system is well designed, providing a couple of well-labeled hints and the solutions for each of the puzzles. Much like Chapter 1, in order to get to the hint system, you had to solve a pretty simple puzzle. It’s playful twist on the online hint system and helps give the game some unique character.

Scarlet Envelope continues to impress and this first true outing proved that the introductory chapter was no fluke.

For less-experienced players I do strongly recommend that you consider the easier subcription, as some of the puzzles here are Hard. For experience enthusiasts, I think you’ll appreciate the challenge, I certainly did.