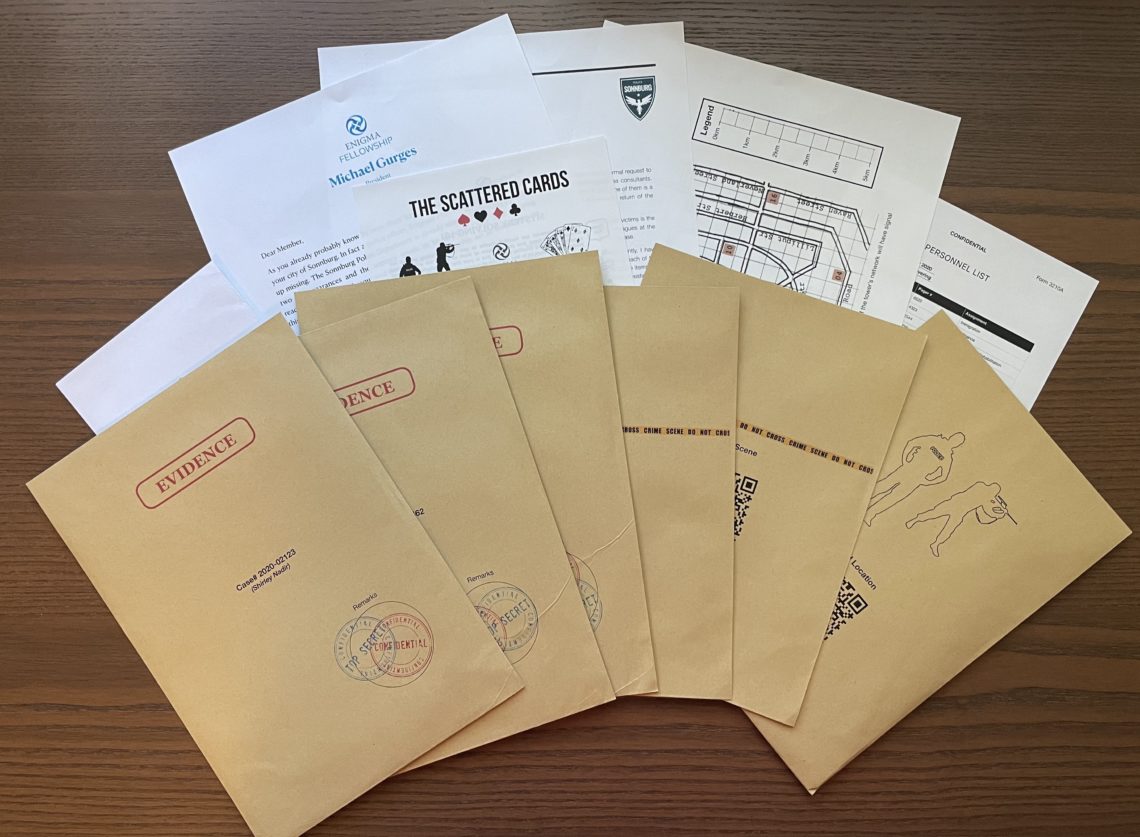 “The Sonnburg Police Department has been investigating mysterious disappearances of citizens in the city for the past few weeks. The case has only taken a turn for the worse now that a Police officer has turned up missing as well. The only connection seems to be random playing cards received by each victim before they vanished. The Enigma Fellowship has been brought in due to our expertise in solving mysteries.”

After playing and enjoying Enigma Fellowship: The Lost Knowledge last week, it was a real easy decision to dive into the game’s second chapter this week. Much like Chapter 1, the game comes in a familiar white and blue envelope; though—as you can see above—this time there was a much larger assortment of items available to me from the get-go.

After unpacking the envelope and reading the introductory letters, I found a variety of mysteries to investigate at the start of the game—allowing me to solve the first half of the game in the order of my choosing. I found that flexibility helpful as it would let me set aside one part of the game when I got stuck and pick up something else to work on for a bit.

The running time was a little harder for me to estimate this time around, as a series of real-life distractions caused me to put the game down and pick it back up a few times over the course of two days. But if I had to guess, I’d say it took at least two hours for me to figure out the kidnapper’s puzzles and save the day.

The story this time around was a pretty dramatic departure from the previous chapter, causing me to trade in my leather fedora for a deerstalker cap. You’ll play the role of an independent investigator trying to solve a string of mysterious kidnappings that have flummoxed the police. While this is a very familiar setup, the Engima Fellowship delivers some clever twists that elevate it above similar genre fare. For one, the game avoids the problematic true crime cliche of murdered women, instead settling for a more bloodless (yet, still compelling!) affair that can be played by the entire family. The story takes some great twists and turns and provides a really satisfying answer to the question of “Why would a kidnapper leave clues that would lead to their own capture?”

In addition to a compelling story, the game is also filled to the brim with nerdy little easter eggs, especially for fans of Community. Much like Chapter 1, most of the props are fairly simple, printed on regular printer paper. However, there are a few props that go above and beyond in this installment, including a very good looking newspaper and the titular cards, which can be used for a very unique Euchre deck after you’re finished with the game.

The difficulty level of this game was definitely a step-up from Chapter 1 and I found myself needing to use more hints than I normally do in an at-home escape game. The puzzles all were well-written, logically constructed, and fair—just difficult. In hindsight this is one I probably should done with a friend, as I frequently would find myself fixating on one element when the solution laid with others.

My favorite puzzle in the game was one that required me to triangulate a location on a map. This isn’t a spoiler as the game tells you multiple times from the start that you’ll need to use triangulation in the game. That said, I love triangulating things—seriously, there’s just something very satisfying and magical about it—so I was just happy to see it make an appearance in the game. I can’t recall seeing it in a puzzle game experience before, which is odd, as the idea lends itself perfectly to puzzles.

As mentioned, I needed to use several hints during the game. Fortunately, just like Chapter 1, there is a really great, progressive hint system that is available on every page that has a puzzle. Usually I just needed a nudge in the right direction and the game was able to provide that without making me feel like I was having the puzzles solved for me.

The Scattered Cards was an enjoyably difficult solve. This likely isn’t the best game for new players, but enthusiasts will find a lot to like here. The difficulty is such that I would recommend that you have at least two players, as multiple perspectives will be helpful for solving this game.