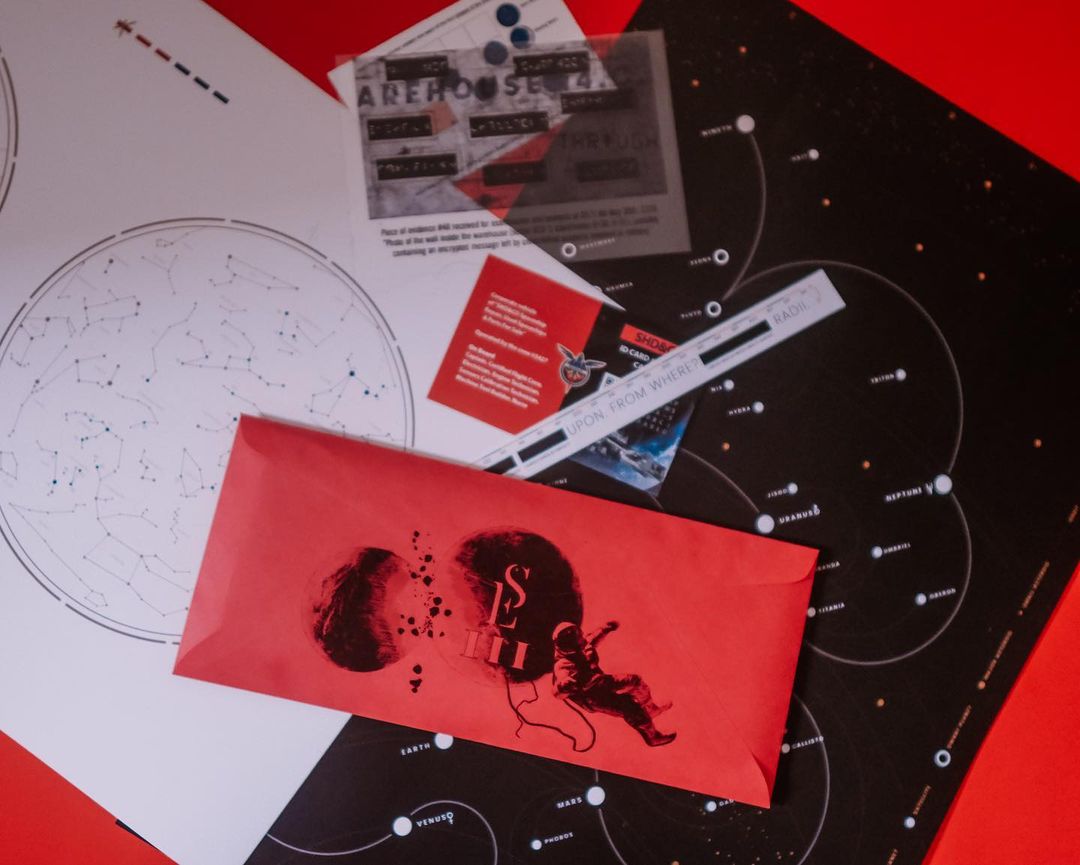 “The year is 2220, a century into human colonization of Mars. Your spaceship picks up the distress call from a Martian spy who has discovered a dark secret that can stop the war between Earth and Mars! Now, encrypted Martian files are in your hands, along with the fate of our Galaxy. Will you accept the challenge?”

In Envelope 1 of Scarlet Envelope, I was impressed by the large diversity of genres the game hinted at yet to come. What I didn’t expect was how those genres would affect the gameplay itself. Cabaret in Lapin Blanc was stuffed with paper pieces to solve, whereas Distress Call from Outer Space only comes with four pieces of paper in the envelope: a large map, a ruler, a mini-puzzle to access the hint system, and a piece of transparency. Since the game is set in the future it makes an intuitive sense that much of the game would be online! The game effortlessly transitions from paper-based to a digital interface more akin to the Society of Curiosities augmented reality games. I’m impressed by the creativity and playfulness apparent in the game’s willingness to re-invent its gameplay based on the story, which makes me very excited to see what twists and turns await me in future chapters.

My play experience was a little more broken up than usual, with me starting it one day and finishing it a couple of days later. This game is fairly non-linear, so it ended up working out mostly well. However, I missed one question on the game finale quiz because of a thread I dropped between days. Overall, it took me about 90 minutes to prevent a galactic war—you’re welcome galaxy!

Scarlet Envelope continues to deliver excellent storytelling with this installment. The augmented reality nature of the game provides a lot of space1Pun always intended. for subtle world-building, which it delivered in spades. All of the digital elements were superbly implemented, including a very well-crafted terminal interface.

Much like how the new Doctor Who often has a suspicious number of aliens threatening Cardiff, I appreciated that the threat of the game was pointed at future “New-Canada”. It’s just a fun little touch that gives the game more personality than it would have with a more generic target Also, much like Doctor Who, the baddies definitely seemed like fairly obvious future extrapolations of current influential figures and corporations, allowing for some decent satire in the mix too, which is always welcome.

As always, I appreciated the wrap-up video at the end, which provided a summary of the story and the puzzles, filling me in on any little crumbs I may have forgotten about or missed during the story.

The difficulty level of this installment managed to stay perfectly in the goldilocks zone of difficulty2There are two difficulty tracks to the game, and I’m on the more difficult track.—it’s difficult, but never unfair. Everything is very well sign-posted without being obvious. I liked the variety of puzzle types in this game, the puzzles all felt distinct from each other, even the ones that used the same game pieces.

There were two minor issues I had with the puzzles this time around. The first one, is that the ruler included with the game is not to scale with the map scale. It looks small at first, but by the time you get towards the 400M km side of the ruler, it’s pretty far off.

Update — After reaching out to the creators, it turns out there was a printing issue with a small number (~20) of the rulers sent out in these games, they’ve fixed the issue.

The other minor issue is that one of the puzzles is color-based and uses the exact shades of red and brown that look identical to people with deuteranopia. The puzzle fortunately has more going on to it than the colors, and so is solvable without that distinction, though it requires an additional logical leap that other players wouldn’t need to make.

Scarlet Envelope continues to be out of this world! This is a great game for an experienced player looking for a new challenge each month. I’m not sure how much easier the beginner’s track is, so I can only recommend it to new players who are looking for a challenge.