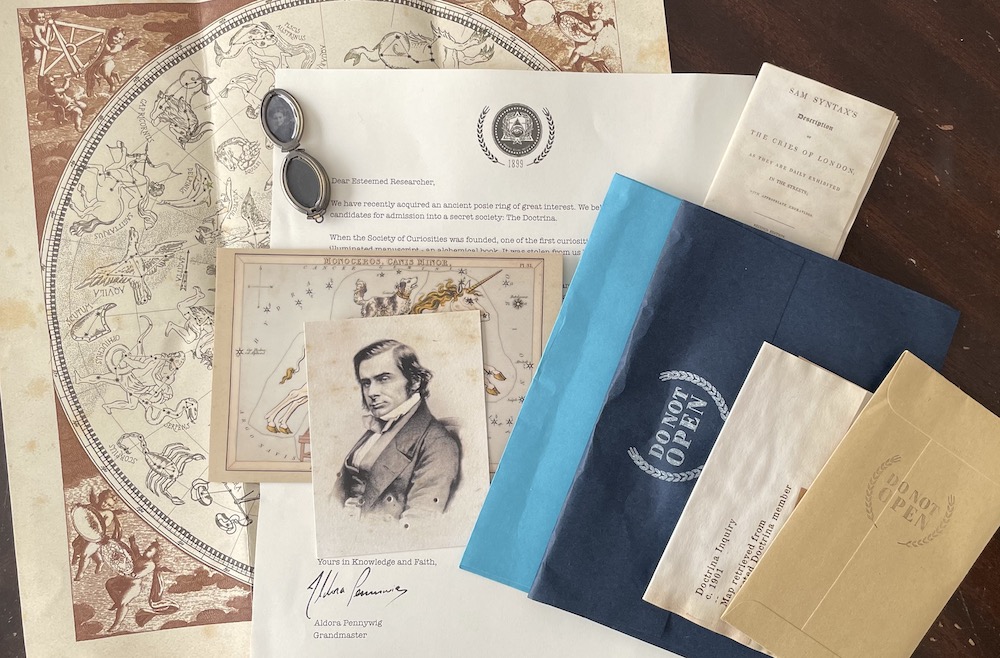 “You receive a mysterious envelope filled with clues and artifacts: an ancient constellation map, old photographs, a locket, a wax-sealed letter, and more! Deep-dive into the ancient objects, articles, and expert resources to track down the location of an ancient alchemical manuscript!”

After the stellar first chapter of Society of Curiosities—still my favorite at-home puzzle game experience—I was etremely hyped when I received the second chapter in the experience. While this one wasn’t quite as smooth of a game experience or as mind-blowing for me as Madok’s Lost Treasure, it was still an excellent experience from a team that has established themselves as the best of the increasingly expansive at home puzzle game genre.

After opening the envelope and pulling out the contents, I was once again struck by the quality of the props inside the envelope. Society of Curiosities are consistently making the best props in the at home game industry. Much like Madok’s, the game features a centerpiece keepsake prop, this time a locket, which feels like an antique, throwing me straight into the deep-end of immersion and suspension of disbelief. The rest of the props were so convincingly aged and designed that it was easy for me to miss the game elements incorporated in some of them, unless I was actively looking for them. I am incapable of saying enough nice things about how these games look and feel.

The game took me a little over two and a half hours to complete. The game features several pause points during the process, which is thoughtful for a game this long. I do recommend waiting until you get to one of those pause points before stepping away from the game. I ended up having to run a quick errand unexpectedly in the middle of a chapter—the character I was communicating with sent me increasingly urgent text updates every seven minutes until I was able to get back home and finish the task he had sent me after. The texts also included an increasing amount of hints and direction about what I should be looking for, so overall I think it’s a pretty nice design decision to help newer players that might be struggling.

The game excels at narrative immersion, making you feel like you’re part of an adventure that is actually happening as you play it. In what has become a signature style for the Society of Curiosities, you play the game by messaging with a team of fellow Society Members (smartly programmed chatbots), using them to interact with the environment in the various sites you visit around the world. This time around the experience is upgraded with several “live” video messages from the team, allowing you to put a face to one of the names and supporting the conceit that this is all really happening.

In addition to the excellent props mentioned in the intro, the game uses alternate reality mechanics, requiring you to seek out websites and call phone numbers in order to solve the puzzles, further enhancing the reality-bending presentation.

The only odd thing about the story this time around was that I was expecting it to feature a character I learned about in one of the inter-chapter mini-mysteries, but that character wasn’t anywhere to be found in the story. It’s very possible that the character will show up in a future installment, but after being teed up so prominently, their absence was felt. That said, I was very pleased to see the meta-narrative of the series blossom from a small story about a pirate into something far more wide-reaching.

The difficulty this time around was a definite step-up from the previous chapter, requiring a greater attention to detail and a little more abstract interpretation than previous chapters. It’s not overwhelming, but I did find myself needing a nudge or two more from the hint system than usual. Everything felt fair and reasonable and usually those gentle hints would make me smack my head and say “Of course!” I appreciated that the puzzles all felt distinct from game one, while still fitting into the feel of a Society of Curiosities game.

That said there were a few, very-minor hiccups in the experience that prevented it from being a buttery-smooth solve. One of the puzzles relied on a clue that was difficult to discern in the medium it was presented. Another—upon first examination—solved to a wrong answer, throwing me off and sending me to the hint site. After checking the solution, I realized that the correct answer was, in fact, a better answer for the puzzle (and had a secondary marking to signpost it as the correct answer), but the wrong answer was convincing enough that I’d stopped searching for other answers once I’d found it. Overall they were very minor imperfections in what was, overall, an excellent puzzle experience.

One of the puzzles, a large multi-step one, required being able to distinguish the colors between stars that were stamped in a rainbow’s worth of colors. It was a little disappointing for me, because the puzzle was brilliantly designed and wonderfully complex, but was a complete no-go for me—I had to read about how it was solved in the solution. I think the creators could have kept the puzzle difficulty and aesthetic intact while using slightly different star shapes for each of the colors, which would have allowed for folks with colorblindness (aka me) take a proper crack at it.

I’ve mentioned it several times in this review and others, but—as always with Society of Curiosities—the hint system is top notch and will usually nudge you back on the right track long before it gives you the answer. Additionally, the chatbot system that SoC uses should be the industry standard. You never have to worry about putting your answers in the exact right format, it uses (AI-assisted?) semantic analysis to pick out the answer from your conversational responses, and does an amazing job at it.

While this review may have seemed a bit more critical than most, don’t let that dissuade you from checking out this game. I’m just picking nits at this point; this chapter—and the series as a whole—makes a solid argument for being one of the best at home games you can play.

Obviously, I would recommend that you start with the first two games in the series, Mysterious Map Heist and Madok’s Lost Treasure. But, honestly, if you’re reading this review and haven’t played those games yet, I recommend that you just go ahead and save yourself a bit of money by buying the entire year at once.