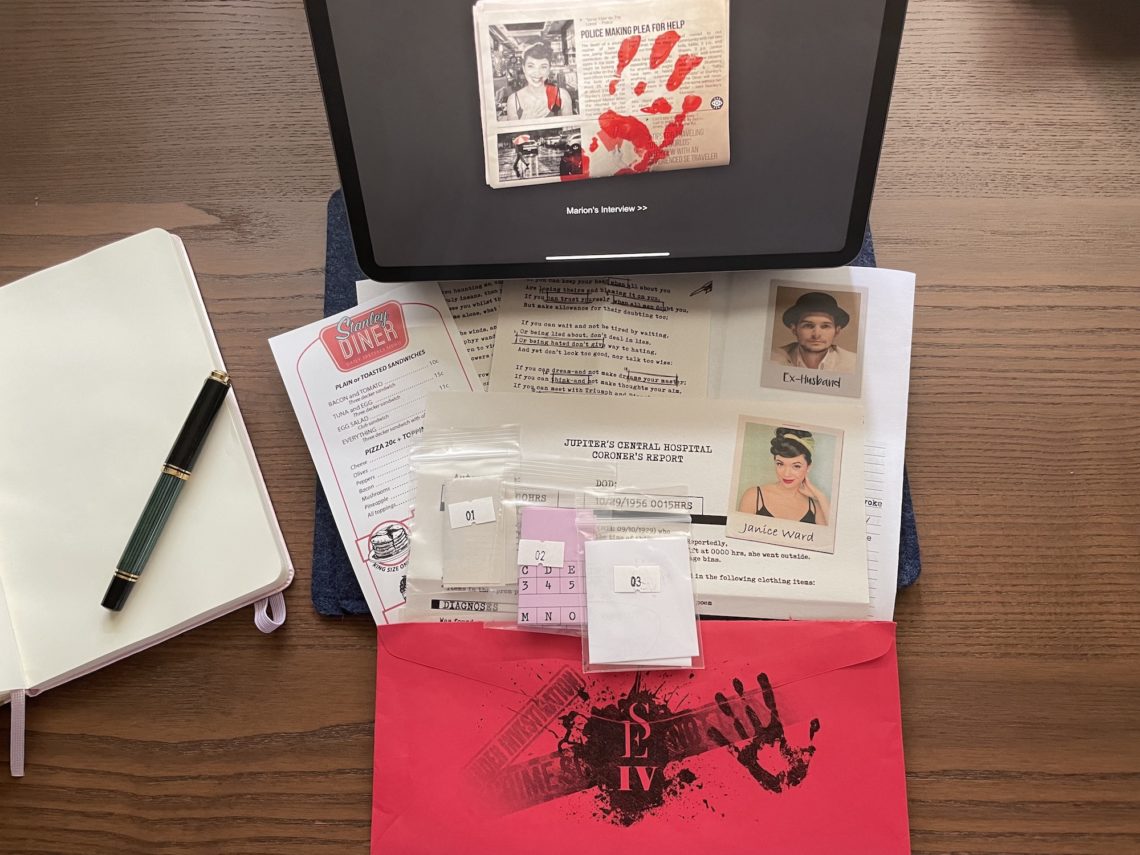 ““Extraordinary Weekly”, 1956: “The death of a waitress at Stanley’s Diner, is being investigated in connection to similar cases…” This time, you work as a cop in the fifties. Bring justice to the victims of a serial killer who clearly has a thing for junk food! Expect case files, coroner’s reports, & footage of suspects’ interrogations with real actors!”

The most exciting thing about the Scarlet Envelope series is that you’re never quite sure what sort of setting or scenario you’re going to find yourself in when you open the envelope. It’s always a fresh experience and—in a sense—it reminds me of a puzzle game version of Quantum Leap, where I bounce around time, solving mysteries and righting wrongs.

After my recent leaps to Moulin Rouge-era Paris and Space, this time I found myself in a noir-inspired murder mystery in Anytown, USA 1956, where a serial killer has been terrorizing waitresses at small-town diners. Catching a serial killer is a well-trod (if not the most-trod) genre in the puzzle game community, so this chapter was a little less novel than the other envelopes I played through; though Scarlet Envelope distinguishes itself well with an audio-visual rich production and some really clever puzzles throughout the game.

I played through this one in approximately 90 minutes or so. This chapter felt easier than the previous chapters, with a difficulty that was about on par with the Introduction to Mysteries chapter. But I had a lot of fun in my playthrough.

The narrative elements on this one shine, distinguishing itself from other murder-mystery games I’ve seen by centering the experience around audio-visual elements. The meat of this experience is watching and listening to the police interviews of five different suspects, each with their own potential motives and opportunities to commit the crime at the center of the mystery. The interviews are split evenly between video and audio; all of which include text captions and transcripts. The game helpfully includes a handout with dossiers of each of the suspects and places for you to take notes on each of their statements.

Also included with the game are a couple of other convincing props, including: a diner menu, autopsy reports, three sealed bags of evidence that you unlock as the game progress, and a couple of poems written by the killer. The production quality is great and they all do a good job of emulating the look and feel of items plucked straight from 1956.

Like all good murder mysteries, at the end of the game you get to choose which suspect to j’accuse. That suspect will be carted off and locked away, regardless of their guilt or innocence. It adds a little suspense and tension to the final part of the game, knowing that you could be putting somebody away for a crime they didn’t commit while a killer walks free.

Unlike previous chapters, the puzzle flow in this game is a very linear process. After watching/listening to each suspect’s interview, you are asked to solve a puzzle to move on to the next interview. These puzzles are cleverly designed and well-implemented, all of them solving to a password that you enter into the website.

One particularly clever puzzle tied two related concepts together in a way that I had never seen done before, which was satisfyingly tough to solve, but led to a wonderfully brilliant a-ha moment that made everything seem obvious in hindsight.

The only thing I really have to criticize about this chapter’s puzzles was that the most important one—the murder mystery—felt super easy to solve. I’ll try to explain a bit without spoiling anything. As I played through the game, I watched the interviews and took notes, trying to figure out all the various alibis and motives; then at a certain point in the game, it handed me a (proverbial) smoking gun that made all my notes inconsequential and which basically said “This person did it”. The clue seemed so obvious that I questioned whether or not it was a red herring—it was not. It ended up being the critical clue needed to solve the mystery.

I had a similar issue with DMS‘s The Inheritance, where finding the killer felt perfunctory after solving the other puzzles in the game. So it could very well be a me problem; after years of reading and watching Agatha Christie stories, I really want to dive in and do some deduction for the final solve in a murder mystery. I don’t design games, but I have to imaging that designing such a puzzle while balancing difficulty for a wide swath of players must be incredibly difficult.

One of the puzzles required distinguishing between shades of red and green to be able to solve the puzzle. The shades used were distinctive enough for me that I was able to solve it without needing to bust out my digital toolset, but your mileage may vary.

While I may have felt the main puzzle was a bit on the easy side, the rest of this experience was filled with some clever and fantastic puzzle play.

This envelope does contain some themes and descriptions of domestic violence, so make sure you take care of yourself when playing through.

The Scarlet Envelope series continues to delight and I continue to recommend it to anyone looking for a great monthly series from a small, queer-women owned business.