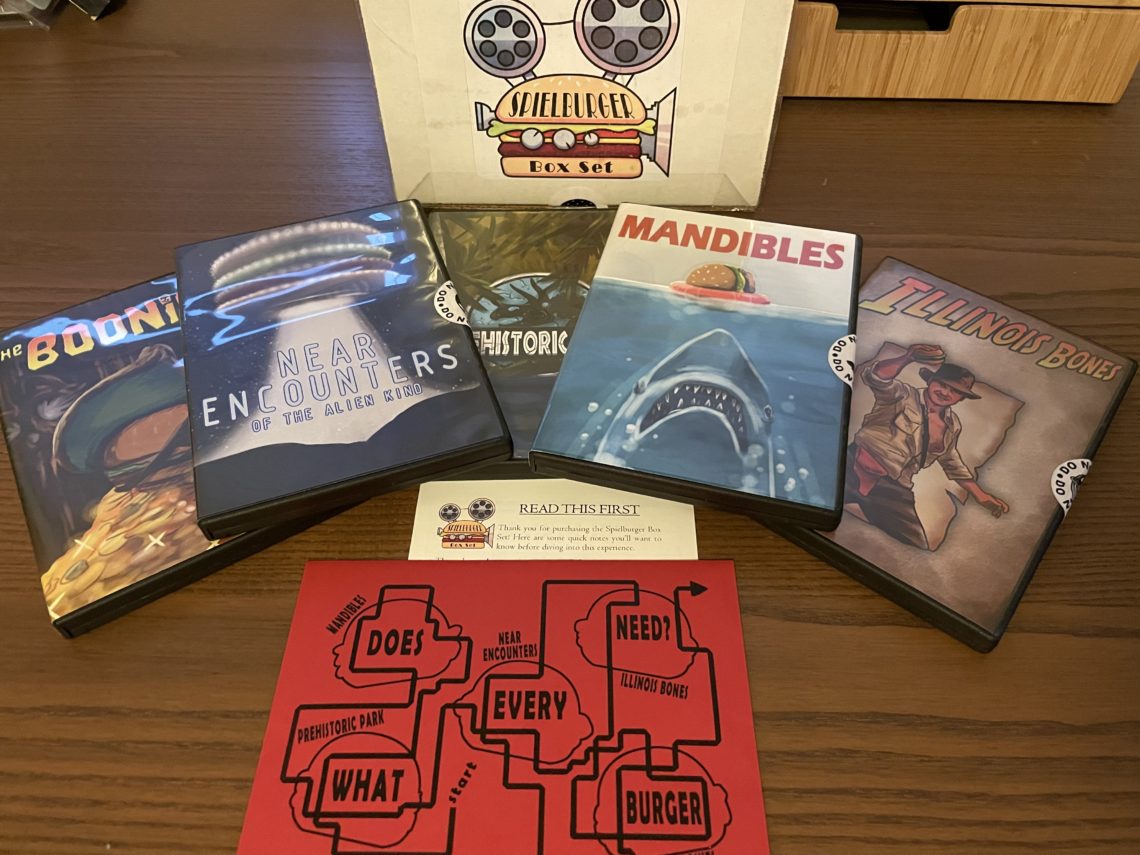 As a geriatric millennial, who grew up in the 80’s and 90’s, I probably love the Spielberg blockbuster canon as much as most other nerdy people my age. However, there came a point sometime early during the last decade when our culture hit peak nostalgia-based marketing and I found myself feeling really burnt out on them as a whole1Also, let’s be real, a lot of them haven’t aged particularly well!. I mention this only to say that a game based on a nostalgic franchise from the 80s isn’t an instant buy for me. (It doesn’t help that most licensed board/escape games are pretty bad.)

So, when Trapped Puzzle Rooms announced that the next game in their Trapped Takeout game series would be based on Spielberg films, I was initially underwhelmed by yet another nostalgia-themed game. However, when I actually looked at the game description and what they were doing with it, I very quickly changed my mind. Much like early Weird Al, they have made light-hearted, food-themed satires of some blockbuster hits. Which, yeah, I’ll admit, bullseye’s me directly in the overlap of several of my nerdy interests.

The game is overflowing with the same irreverent writing style that won me over with Taco Twosday. Starting at the top level with trademark-adjacent titles like “Illinois Jones”, “Prehistoric Park”, and “Mandibles” and all the way down to little details like “Dinosaur Supervisor: Bill Bippett“2Pro-tip: Take a moment to read the entire DVD case, they’re filled with hilarious little jokes and puns like this. the humor is omnipresent throughout the game.

I played through the game over the course of several days, each chapter clocking in at almost an hour exactly. I really appreciated the “pick-up and pick-down” episodic nature of the series; each chapter is completely self-contained, so you don’t have to worry about remembering details or puzzle components from one session to the next.

The game promises 3-6 hours of play, and I found that to be right on the money, with most of the games taking 45 minutes to an hour and a final meta-puzzle that took about fifteen minutes, and functioned as a surprisingly delightful capstone to the experience. That said, while most of the game was really clever and enjoyable, there were a few, minor things on the puzzle play side that didn’t work for me, as I’ll get into below.

As with Taco Twosday, the game is run through a website, which sets up each of the games and validates the answers. Each chapter of the game features a short—but relevant—clip of the movie they’re lampooning. These clips aren’t just set dressing, they have a few purposes: they show off the inspiration for the puzzles you’re about to dive into, they set the mood, and they occasionally provide a subtle nudge and hint about what you’re supposed to do with the puzzles.

The entire experience is narrated and guided by a simple, but well-done, animated Steven Spielburger. I really appreciated the little animated clips, while they likely could have gotten away without them, I think they added just the right amount of fun to elevate the experience above the ordinary.

Each chapter of the game came inside a sealed DVD case, with some really fantastic cover art. Inside each case are two puzzles, both of which are inspired by events in the movies they are based off of. I appreciated the extra effort in making these feel distinctly a part of those cinematic experiences. You’ll be using a map to hunt for lost treasure in “The Boonies”, running through a lost temple (no relation) in “Illinois Bones”, and tracking some rampaging, escaped dinosaurs in “Prehistoric Park”.

Also, it’s neither here nor there for me, but the game might more accurately be described as a Ready Player One parody, as you are put in the role of a “bunter” searching for the five golden burgers that are hidden in the Spielburger films. My only experience with the book or film comes from a comedy podcast about it, so I’m not one to judge how enticing that may or may not be for you, but it’s worth noting.

Between this and Taco Twosday, I’m beginning to get a good feel for Trapped Takeout’s game style, and I’m a fan. Their puzzles feature a lot of paper pieces printed on and cut out from colorful card-stock, giving the game a tactile and cheerful feel. They are fairly straightforward, erring on the lighter side of difficulty and feature a lot of wordplay-based puzzle, which they excel at.

The game encourages you to bring some scotch tape to game, and I can confirm that, while not strictly necessary, the tape helps out a lot. Many of the puzzles involve taping pieces together and then solving an indexing puzzles based on the results. But don’t let that overly-simplistic description, they are able to come up with some really fun and novel puzzle concepts from this simple setup. For example, one game requires you to match up flying saucer parts based on a combination of movie trivia knowledge and you trying to interpret what famous buildings a series of mashed potato sculptures are sculpted as.

That example also brings me to the few things that didn’t work for me with this game. Unlike most at-home games I’ve played over the course of this year, this game does require outside knowledge not present in the game. Every chapter requires you to answer a trivia question about the movie in and the game with the flying saucers require you to be able to match a list of famous locations with a list of movies they are featured prominently in. It’s all stuff that’s pretty easily google-able if you don’t know it, but anytime I have to stop playing a game and open up Google, it’s pretty immersion breaking 3Plus, as someone who’s easily distracted, opening up Google means looking at my computer, checking my notifications, and losing an hour before I remember to google the thing I came there for. 😅.

It’s also a minor quibble, but the game features password-style prompts to move on in the game, which works well with indexing puzzles, but less well with answers to trivia questions.

One last thing that the game does well, is that it’s color blind friendly. One puzzle features interpreting colorful circles, but it also uses the circle’s position as a secondary indicator. So no problems at all.

Despite my minor issues with this game, I did have a really fun time playing it. Featuring approximately six hours of gameplay, I also felt like it was a good value for the money.

I would recommend this game to folks that are looking for a fun, family-friendly game to play over the course of multiple sessions.

It’s probably best enjoyed by people who are pretty familiar with all five films, though if you haven’t seen all of them, you can still have a great time with the puzzles, as long as you don’t mind googling the trivia answers.